All the members of The Lincoln Academy of Illinois extend our deepest sympathies to the family of Richard Driehaus (Laureate 2017). 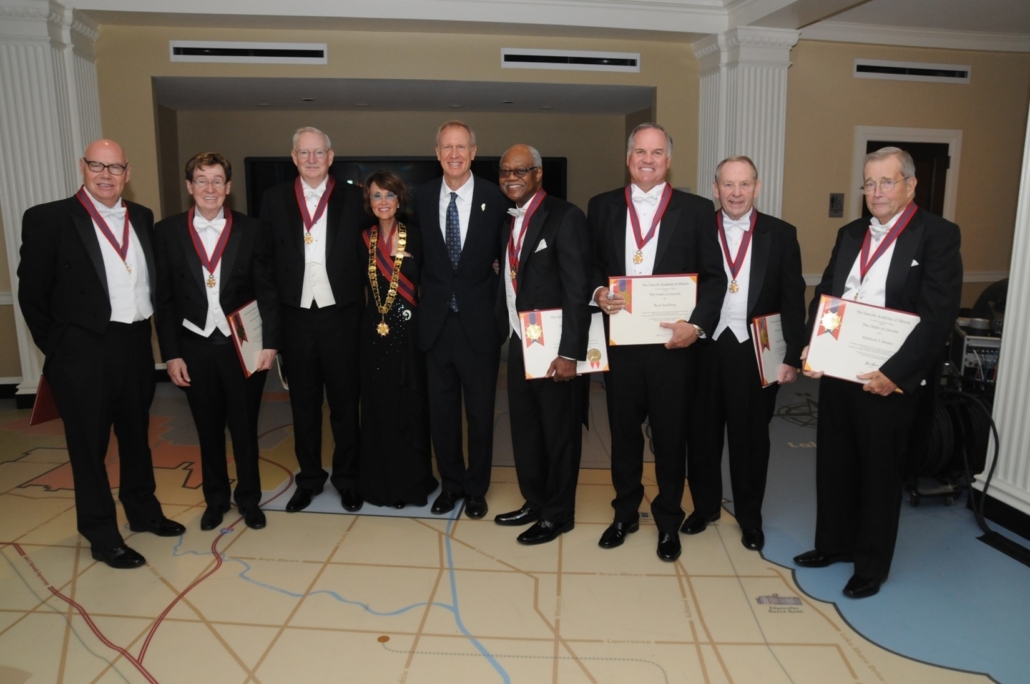 Richard Driehaus’ (second from left) extraordinary success in the investment management industry fueled his transformational philanthropic gifts in the built environment, education, arts and culture, investigative journalism, and economic opportunity for the working poor. His philanthropy was been guided by a philosophy that giving back to society makes for a fuller life, viewing philanthropy as a form of inquiry; a way of learning about the world. According to Mr. Driehaus, ‘Like investing, it requires strategic thinking, innovation and tolerance of risk. Failures can be as important as successes’.

In appreciation of the important role of education in his life, gifts to educational institutions included donating $30 million in 2012 to DePaul’s business school, now named the Richard H. Driehaus College of Business, to support faculty recruitment and retention. (He graduated from DePaul University with a bachelor’s degree in commerce in 1965 and a master’s in business administration in 1970.) He also generously supported his undergraduate alma maters: St. Ignatius College Prep High School and St. Margaret of Scotland Grammar School.

A vocal advocate for the application of humanistic values in the built environment, Mr. Driehaus nurtured his passion for architecture by funding initiatives in design excellence and historic preservation. In 2003, through the University of Notre Dame, he established the annual Richard H. Driehaus Prize, presented to a living architect who has shown dedication to traditional and classical design. In 2008, he completed a five-year restoration of the 1883 Samuel M. Nickerson Mansion in Chicago. The Gilded-Age residence is now the Richard H. Driehaus Museum featuring historically appropriate pieces from the Driehaus collection of Fine and Decorative Arts.

Born and raised on Chicago’s South Side, Mr. Driehaus is the son of an engineer at a firm that designed and manufactured coal-mining equipment. As a boy, he developed an appreciation for architecture while working his newspaper route. He credited his coin-collecting hobby with introducing him early on to the dynamics of quotes and price changes. His interest in the stock market began at age 13 and, at 15, he made his first stock purchase.

After rising through the ranks of various financial firms, he established Driehaus Capital Management in 1982. Mr. Driehaus gained prominence by popularizing “momentum investing,” the practice of identifying and buying stocks that are doing well and holding them while they continue to rise. In 2000, he was named to Barron’s magazine’s “All-Century” team of 25 individuals identified as the most influential within the mutual fund industry over the past 100 years.

Today's Student Laureate Spotlight features Madison Psinas from Judson University. Psinas, a May '22 graduate with a degree in Architecture, is currently serving as an Architectural Designer for the Farnsworth Group.

During her time at Judson, Psinas's service activities include volunteering at her local pregnancy crisis center, the Hope Chest Resale Store - Elgin (a community thrift shop whose proceeds go to helping out the homeless and needy), and working at multiple American Red Cross blood drives. As a freshman, Psinas was selected as one of Judson’s Roeser Scholars which is given to students based on academic merit and leadership qualities.

In her Lincoln Legacy statement, Psinas writes:
"Lincoln's commitment to a vision of a just country that tackles inequities in society together is a model for us to build an even better civilization than the one we have inherited. When we seek the truth, when we choose to care for our neighbor, and when we humbly maintain and act on honorable beliefs, we are building a better community for ourselves and for those to come."

Please help us congratulate today's Student Laureate Spotlight, Rebecca Gadiel of Knox College. Gadiel graduated in May with a major in Psychology and minors in Social Service and Philosophy.

During her time at Knox, Gadiel served as a Dare to Care Peer Educator for three years. Through her advocacy as a peer educator, Rebecca hoped to reduce some of the stigma that is attached to seeking mental health care. As a future clinical psychologist, Becca hopes that all in need will feel more comfortable getting help and realize the importance of taking care of one’s mental health.

In her Lincoln Legacy statement, Gadiel wrote:
"In thinking about the legacy of Abraham Lincoln, what resonates most with me is Lincoln’s unwavering belief in the possibility of a better world, and his steadfast commitment to helping bring about that change. With as much progress that has been made since Lincoln gave his Gettysburg Address, we still have a ways to go in our quest for a more equitable, just, and kind world. I feel fortunate to have been raised with these values in mind, and privileged to have spent the duration of my college experience in an institution committed to these ideals. I look forward to continuing to work towards a better world as I pursue a career in social work, with the goal of ensuring every individual has the resources and support they need to live healthy, secure, and fulfilling lives."

Way to go Becca! We’re so proud of you!

Way to go Becca! We’re so proud of you!

Earlier this month, The New Yorker did a feature on '21 Lincoln Laureate inductee Mavis Staples. The piece covers what Staples is currently up to as well as dives into her past - telling stories about her family, her relationship with Aretha Franklin, and the terrifying experience of touring in the Jim Crow South.

"Mavis Staples has no patience for segregation, in politics or in music. She is at once sure-minded about the essential place of Black composers and performers in American music and open to singing with anyone who can keep up."

The Gospel According to Mavis Staples