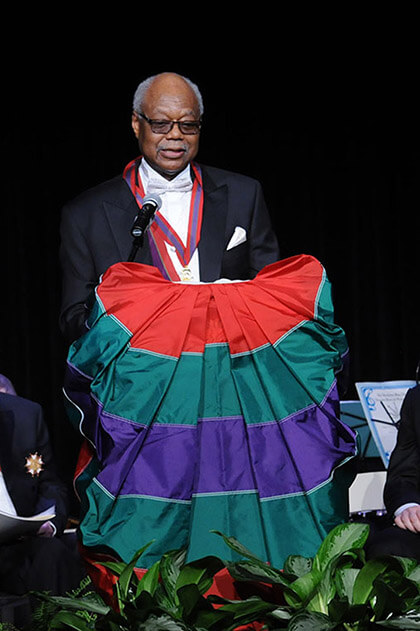 SPRINGFIELD–Frank M. Clark, the former ComEd CEO and Chicago Board of Education President, has been installed as the new Chancellor of the Lincoln Academy of Illinois. Clark’s three-year term as head of the organization began on Saturday, May 18 following the Lincoln Academy’s annual Convocation, where six distinguished Illinoisans were recognized for their achievements.

“Abraham Lincoln exemplified what is great about our state and nation, and I am at once proud and humbled to guide the organization that invokes his name to honor our very best,” Clark said.

Clark was named a Laureate of the Lincoln Academy during the organization’s 2017 Convocation. He was the first African American to serve as the CEO of ComEd and had a 46-year career with the utility company, during which he supported minority hiring and African-American businesses through the establishment of the Business Leadership Council. Clark is the son of a Chicago Public Schools teacher, served as President of the Chicago Board of Education, and co-founded Rowe-Clark Math & Science Academy, a public charter high school on Chicago’s West Side. U.S. Black Engineer & Information Technology Magazine named Clark to its annual list of the 100 Most Important Blacks in Technology, and Clark was ranked among the 50 Most Powerful Black Executives in America by Fortune magazine in 2002.

Clark has served as Vice Chancellor and a General Trustee of the Lincoln Academy. He is the 11th Chancellor in the organization’s history.

Clark presided over the 55th Annual 2019 Convocation ceremony on May 18 at the State Capitol in Springfield. The six Illinoisans who received the Order of Lincoln, which is the state’s highest honor for professional achievement and public service, included Jerry Colangelo, Edgar J. Curtis, Sheila CrumpJohnson, Benjamin K. Miller, Olufunmilayo Olopade and George F. Will. They joined 348 other distinguished Illinois citizens who have been honored by the organization during the past 55 years.

In 1975, the mission of The Lincoln Academy was expanded to include a Student Laureate program honoring more than 50 students each year, one from each four-year college and university in Illinois and one student representing our state’s community colleges, selected on the basis of demonstrated exemplary leadership and service and excellence in curricular and co-curricular programs. Funds raised at the Academy’s Order of Lincoln Convocation Ceremony in the spring help provide the Abraham Lincoln Civic Engagement awards and the “Lincoln Medallion” presented to each of the student laureates at a separate ceremony held each fall in Springfield.