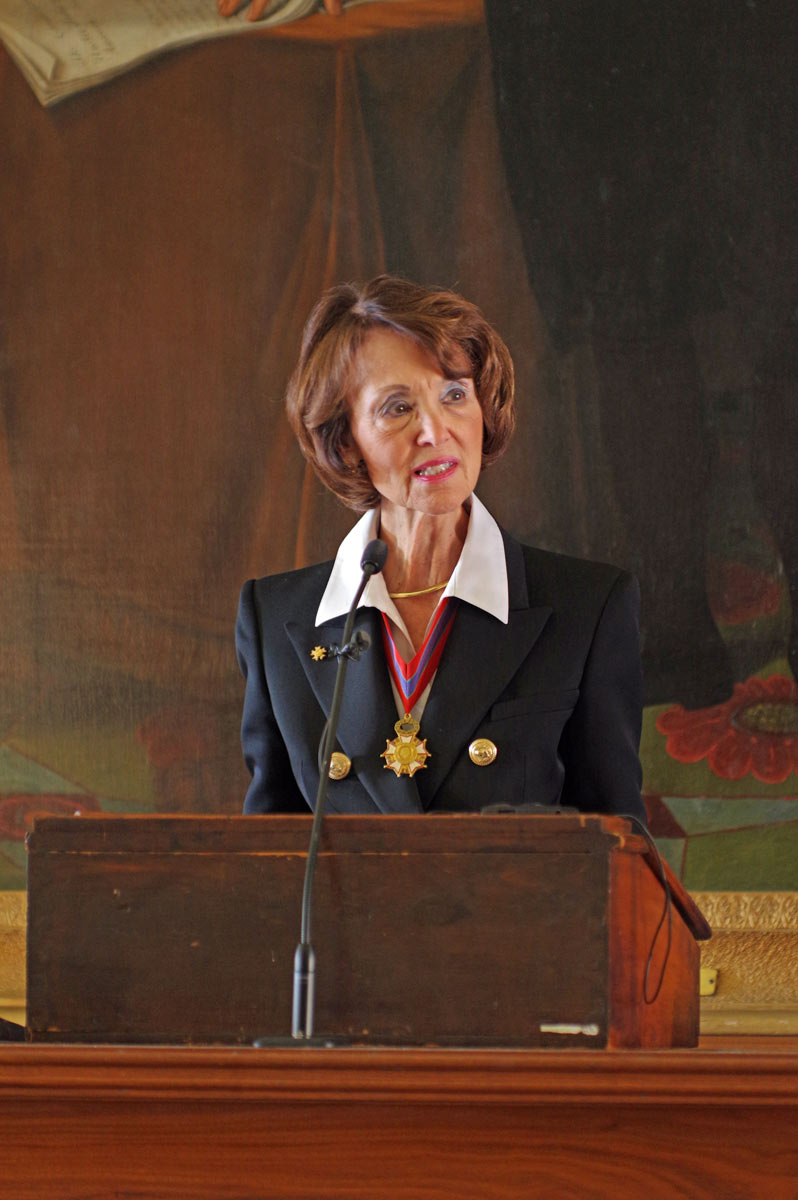 “In the spirit of Abraham Lincoln, put your name on impossible causes and resist anything and anyone that is too small for your imagination. Do not become complicit or silent in the diminishment of yourself or others.”

Good morning everyone — students, families, Academic Trustees, partners and distinguished guests and welcome to the 43rd Student Laureate Convocation of the Lincoln Academy of Illinois.

I am Stephanie Pace Marshall, Chancellor of the Lincoln Academy and President Emerita of the Illinois Mathematics and Science Academy, and it is my privilege to welcome you to the Old State Capitol, one of the most historic buildings in Illinois, to add the names of 57 remarkable young men and women to our distinguished roster of Student Laureates.

One hundred and fifty-nine years ago, Abraham Lincoln stood in this very room, to accept his party’s nomination for U.S. Senate; it was a fractured and fragile time in our nation’s history.

As it was in Mr. Lincoln’s time, our path forward is also far from clear and the tense discourse in our nation often feels like “a house divided;” however our opportunity to move towards a more perfect Union, remains unparalleled.

We would be Pollyannas if we denied the presence of systemic inequities in our country; but we would be cynics if we believed the decency and goodness of our nation and our fellow citizens, would not prevail.

The Lincoln Academy was created in 1964 by Illinois governor Otto Kerner to honor the state’s most celebrated citizens — those whose uncommon achievements simply made us better.

Today, we are privileged to welcome our Governor, the President of the Lincoln Academy, Governor Bruce Rauner, and First Lady Diana Rauner, and we thank them for honoring us by their presence this morning. Thank you both.

To fulfill our mission, the Lincoln Academy bestows The Order of Lincoln on distinguished individuals from Illinois whose exemplary achievements contributed to the “betterment of humanity, in the spirit of Abraham Lincoln”. This is our state’s highest honor and it is presented annually at a convocation held in cities across Illinois.

In our State’s bicentennial year, it will be held in Rockford.

As Student Laureates, you are all high academic achievers and we celebrate your success. But I trust you know, that academic achievement alone is not sufficient for wisely shaping our world.

As I read your essays, I was filled with tremendous gratitude to see the legacies of leadership and service you are already weaving — demonstrating that walking in another’s shoes is not mere observation, it means we have to put them on, and then walk beside and you are.

Those who live in or near Chicago, may have seen the towering 31-foot sculpture of Abraham Lincoln in Pioneer Court, near the Tribune building; it had been there since November, 2016.

Dressed in a black suit and holding his iconic stove pipe hat, the sculpture was created by Seward Johnson, and moved just a few months ago to the Riverfront in Peoria.

It is titled: RETURN VISIT

Lincoln is not alone in this sculpture; beside him, holding a book and looking pensively at Lincoln, is a young man, casually dressed in corduroy pants, sneakers and a cream-colored, cable-knit sweater.

The book he is holding, is a copy of the Gettysburg Address.

Describing the sculpture’s significance, the curator of the Seward Johnson Gallery in California said: “It is as if Lincoln is explaining the tenets of the Gettysburg Address to him and the relevance these words have today.” (Paula Stoke)

The sculpture was quite impressive, but more powerful to me, was its title–RETURN VISIT;

And that is the invitation, we extend to you today…as our new Student Laureates,

To return to the commitments you have already made for how to manifest them in your own life, now.

Living in the “spirit of Abraham Lincoln” can be seen as elusive, but your actions can bring it to life.

Your unapologetic commitments and intense passion have already changed lives and communities.

And we are grateful because you are just getting started. No pressure!

Several years ago, I had the opportunity to hear a world-renowned photojournalist speak about his work.

After his talk, he invited questions. “Tell me,” a young woman in the crowd asked, “What is the secret to taking a good picture?”

He smiled. “Technique is important,” he said, “but the secret to taking a good photograph is knowing where to point the camera.”

He courageously “pointed the camera” at both the divisions in our young nation and the promise of a united country, and he named what was worth preserving and even dying for.

And so, I challenge you, as leaders, innovators, artists, scientists and teachers to see what others might not yet see, to discern and name both the visible and invisible patterns shaping our national narrative, and to change them when it’s clear they are not working.

In the spirit of Abraham Lincoln, put your name on impossible causes and resist anything and anyone that is too small for your imagination. Do not become complicit or silent in the diminishment of others or yourself.

You are here today because of your tenacious commitment to learning and your outstanding leadership and service.

Along with our Lincoln Laureates, you bring honor to our state and to the Lincoln Academy and we are all very proud of you.

In a moment you will each be called to the well of this chamber. And here — on the same ground where Abraham Lincoln once stood — you will receive the Lincoln Medal and a formal declaration signed by the Governor bearing the Great Seal of the State of Illinois, declaring you to be a Student Laureate of the Lincoln Academy of Illinois.

Mr. Lincoln assumed his presidency with an almost impossible mission: to save the Union. He accomplished this through uncommon leadership that challenged conventional wisdom and what it meant to be a good leader and he did so with a clear and grounded moral compass. He understood the human struggle just as deeply as he did military strategy.

He invited rivals onto his team and through this integration of wise governance, military acumen, and strategic leadership, he saved the Union and ended slavery.

Those defining elements of his presidential legacy are studied by scholars and often viewed in awe by people around the world.

Legacies are complex narratives, and they live long after the life of the author.

They leave unfinished business—and they present invitations and opportunities for the future.

The dynamics are different, but the struggles of Mr. Lincoln’s time—the struggles for human dignity, inclusion and equality—are also present now.

Rather than viewing them as burdens, I encourage you to embrace them as possibilities and to ask yourself what it means that your name is now connected to the name and legacy of Abraham Lincoln.

I’d like to close with a children’s story– although it’s really not just for children; it is actually a timeless metaphor. It’s titled “Nothing More than Nothing.”

“Tell me the weight of a snowflake, a little bird asked a wild dove.

“Nothing more than nothing,” said the dove.

“Well–in that case,” the little bird said, “I must tell you a story.

“I sat on the branch of a fir tree, when it began to snow. Not heavily, not a raging blizzard. No. It was like a dream.

“I didn’t have anything better to do, so I counted the snowflakes sitting on the twigs and needles of my branch. Their number was exactly 3,741,952.

Then, when the 3,741,953rd snowflake landed on the branch—nothing more than nothing as you say—the branch BROKE OFF.”

Having said that, the little bird flew away.

The dove, who was an authority on peace since the time of Noah, thought about the story for a very very long time and finally said to herself:

“Perhaps there is only one person’s voice lacking for peace to come to the world.”

What is the weight of one voice? How can it make a difference?

Sometimes we think our singular voice is just “nothing more than nothing,” and that it can’t possibly be heard in the cacophony of noises that surrounds and engulfs us.

This is the legacy of Abraham Lincoln.

Almost exactly 100 years after the Civil War, the Rev. Dr. Martin Luther King said in a sermon, “The arc of the moral universe is long, but it bends toward justice.”

Nearly 50 years later, at the foot of the Lincoln Memorial in Washington DC, President Obama said: “The arc of the moral universe may bend toward justice, but it doesn’t bend on its own.”

So, use your unique talents, passion and voice to bend this arc in the ways that only you can and carry Mr. Lincoln’s moral compass into our contemporary struggles.

Fortunately, yours is not a solo journey—look around you right now, turn to your left, turn to your right and see your new companions and fellow travelers.

You are all now Student Laureates of the Lincoln Academy of Illinois, and you share a common legacy.

Lean on one another for ideas, support one another, and walk courageously together….